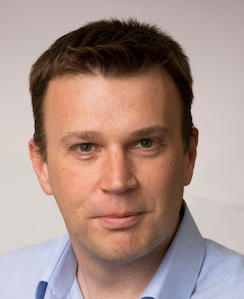 Abstract: Robotic systems can undertake inspection of difficult or dangerous to access locations. This talk will discuss exploration robotics including work to explore the Great Pyramid of Giza Egypt and Survey Glacial melt lakes in Nepal. The use of exploration robotics technologies to inspect and maintain city infrastructure towards resilient and self-repairing city infrastructure (e.g roads, pipes, bridges) will be discussed.

Bio: Professor Robert Richardson is a Professor of Robotics, in the School of Mechanical Engineering, University of Leeds. As PI and Director of the EPSRC National Facility for Innovative Robotic systems, he leads a major EPSRC investment to physically create robust robotic devices. He is co-Director and robotics lead for the EPSRC Grand Challenge to develop autonomous infrastructure inspection robots; and the robotics lead for the EPSRC UKCRIC Centre for Infrastructure Materials Performance Leeds investigating robots for inspection of difficult to access infrastructure and facilities to stress test robotic devices. Within the School of Mechanical Engineering at Leeds, he is the director of the Multi-disciplinary Institute of Design, Robotics and Optimisation at the University of Leeds (20 academics and 50 members). He is a Fellow of the IMechE. He led the UK robotics resilient infrastructure strategic challenge event, on behalf the EPSRC RAS network that brings together international researchers to explore the area of robotics infrastructure research. He is lead author of the UK white paper "Robotic and Autonomous Systems for Resilient Infrastructure" and co-author on the UK white paper "Robotics for Emergency Response, Disaster Relief and Resilience". In 2011 he led an international team to develop and deploy robots into the Great Pyramid of Giza, Egypt, that discovered writing hidden for 4000 years. In 2016 he developed and deployed autonomous surface water survey robots to map glacial melt lakes in Nepal, doubling the known mapping data of these lakes. He is researching into to a broad range of infrastructure robotics platforms including drone based technologies, novel ground robots including robots designed to enter bore holes in mines and other confined spaces. He is developing novel approaches to fabricate advanced robotic structures using hybrid 3D printing and assembly processes. In close collaboration with industry, he is investigating technologies to replace lost function in humans through the development of smart prosthetic limbs with embedded intelligence to self-tune and capture energy during the walking cycle and full body exoskeletons designed to work collaboratively in direct contact with humans, to enhance physical performance.

An Ecosystem for Disaster Relief Operations

Abstract: When disasters strike, communications, coordination, and information sharing among the first responders and emergency personnel become critical to the success and efficiency of relief operations, including response and recovery. This article explores the ecosystem of disaster relief operations in three dimensions within the public safety domain – communications, information sharing, and decision-making - in order to build a solution that will significantly enhance relief operations that take place on the ground immediately after a disaster strikes. It also explores the underlying processes and their interrelationships and identifies strategies for enhanced first responder coordination and response.

Abstract: Device-to-device (D2D) can be a key paradigm to design Pervasive Public safety Networks (PPNs) which could allow the User Equipments (UEs) to communicate directly in disaster scenarios. Recently, the use of Unmanned Aerial Vehicles (UAVs) has been suggested in PSNs to enhance situational awareness and disseminate critical information to the deployed Base Station (BS) by providing reliable connectivity. In this paper, we are interested in direct discovery, one of the functions provided by Proximity Services (ProSe). We consider a disaster situation when no core network is available and transmit the discovery message over UAV-to-UE link. Simulation results are presented and discussed based on the root-MUSIC algorithm to locate the affected UE assisted by UAV, achieving a ca.one meter accuracy at over 200 m. Furthermore, we analyse the performance of the link by calculating Packet Error Ratio (PER) and throughput, achieving up to 11 Mbps.

Abstract: A QoS routing to select the best paths among Drones supporting incoming calls and multimedia traffic in emergency or critical situations is proposed. In situations where drones teams are requested to cover areas and mobile users can need to communicate under the absence of network infrastructure a self-organized on-the fly network can become an essential element. Cooperating with a critical network infrastructure, deploying a QoS aware path selection strategy supporting QoS requests and multimedia traffic such as VoIP and Video traffic can become a key issue to face. In this paper, a bio-inspired strategy to maintain the drones’ network topology in a ligthway manner is proposed. Two metrics considered in a joint unified metric are proposed in order to balance load traffic and, at the same time, select the shortest routes. A comparison with an enhanced Link-State (LS) routing has been performed where the minimum hop count metric has been considered together to a LS routing with maximum available bandwidth metric. Performance evaluation has been evaluated in terms of control overhead, number or admitted calls, average bandwidth utilization.

Abstract: UAVs are increasingly being employed to carry out surveillance, parcel delivery, communication-support and other specific tasks. In certain cases, the same geographical area may be in need of multiple services, which can be carried out by the same drones. In this paper, we propose and investigate a joint planning of multitask missions leveraging a fleet of UAVs equipped with a standard set of accessories enabling heterogeneous tasks. To this end, an optimization problem is formulated yielding the optimal joint planning and deriving the resulting quality of the delivered tasks. In addition, a heuristic solution is developed for large-scale environments to cope with the increased complexity of the optimization framework. The developed joint planning of multitask missions is applied to a specific post-disaster recovery scenario of a flooding in the San Francisco area. The results show the effectiveness of the proposed solutions and the potential savings in the number of UAVs needed to carry out all the tasks with the required level of quality.

The public safety is a timely topic that has showed its paramount importance after the major human-driven and natural disasters witnessed during the last few years. According to the American Institute for Occupational Safety and Health, the majority of the victims in many different scenarios are untrained rescuers and even professional first responders. Accurate information gathered from sensors may allow first-responders and volunteers to make better and faster decisions, understand the situation, identify the rescue actions with higher success probability, correctly allocate resources such as number of ambulances, and prevent or mitigate personal risks. Today, even commonly available technologies, such as cellular phones, could save many lives if properly adopted.

There is a compelling need of exploring the feasibility of new technologies, explicitly designed for working in emergency scenarios. Recently in this wide context, the aerial communication has significantly progressed due to longer battery life-time, new international law regulations and microelectronics evolution with lower prices and higher performance. In particular, Unmanned Aerial Vehicles (UAVs) can easily and quickly reach far-away locations, scan carefully the area looking for injured people and autonomously create a communication bridge between first responder networks and victims. However, there are several unaddressed challenges on both communication and computational means that might further improve the reactiveness and efficiency of the first response after a natural disaster or human-driven threat.

The workshop is focused on main upcoming activities about the involvement of UAVs as emergency communication means during emergency situations. It is open to both scientific and industrial communities, and will disclose the latest research achievements in the research field of fine-grained localization, advanced communication between moving objects and optimal UAV-cell coverage. The main motivation is to gather people involved in public safety innovative actions, encompassing both the mathematical frameworks and realistic solutions to bring intelligence and efficiency on board of UAVs.